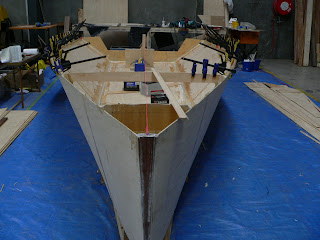 Image above shows One million clamps holding their shear clamp on. There is not really much to show at the moment, but we have been busy. The centre seam and chines have been filleted and glassed. All the frames have been cut with the exception of 89 under the mast step. 18 has been glassed in as has 53 after some sistering pieces added to get a fair hull. 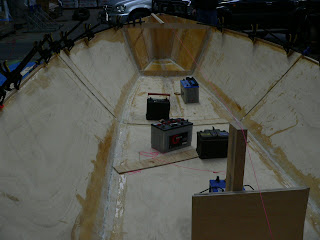 We fitted frames 110 and 124 and decided to sister 110 to give us a fair hull. 124 just dropped right in and fitted just fine. The sister pieces are now glued on, as are front and back 2" wide centreboard case ends. We have also laminated up the centreboard case sides so that we can use them as "spacers" when we install 110 and 124 - if all goes well, that big day will be Monday.

In all this, we are trying to follow the "measure Three Times, cut once" philosophy which is driving wobble nuts, since he can already feel the boat moving and has bought three Tonnes of Harken bling to screw on as soon as the paint is dry. Having said that we have followed Chris Beckwiths "string" measurement procedure and the boat up to frame 124 is dead square as far as we can tell. At 163, the Sides are unsymetrical by around half an inch, but we believe that its caused by variations in the plywood and will easily pull out when we drop that frame in.

Not sure if other people do this, but I found that Pythagoras comes in handy. Calculate the square root of the hypotenuse of the triangle formed by the frame number and the half beam at the deck edge of the frame, and measure and mark that amount back along the sides from the stem. If your hull is something like square, that should be pretty close to where your frame and sides should join.

We are still trying to get all our dimensions sorted out for our rig and sails. The "jib hoist" measurement is confusing since we have to create some sort of datumn for the sailmaker so that he knows where the stem fitting and deck edge are in the verticle plane.
Posted by Sunfish at 9:33 PM