Problems Are Opportunities In Disguise.

Well we have been busy little beavers.. After the making of the cabin top - which was declared a draw between me and a sheet of hoop pine plywood, we started on the cockpit. The bunks we glassed in as bouyancy tanks. We decided that we wanted to support our plywood edges really well, so we glued 1 1/4"" Oregon onto the edges of the frames and then decided to laminate up some 1 1/2"' plywood strips to support the cockpit to deck joint. We cut out the corners of the frames, slathered everything in epoxy and then just sort of clamped the strips in place to the edges of the frames. To out complete surprise they followed something like a fair curve and were within +- 3mm or so when measured from the centreline, except in one spot where we made some saw cuts, pulled the support into line with clamps and slathered the cuts full of glue. 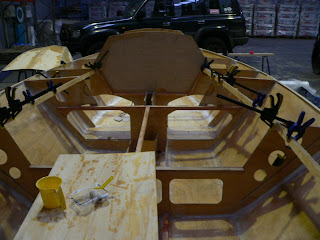 So we had something like a symmetric cockpit structure. We added a few more Oregon stringers to support the cockpit floor. The cockpit floor was not too hard to draft up, and we did it in Three lateral sections, from the Stern, the joints being just in front of 169 and 124. We then glued them all together on the floor, then dropped them into the cockpit when dry for some trimming. We did a similar thing to make the sides.

We decided to follow the (Pipedream? Alchemy?) construction method so we carefully taped up the frames so that nothing would stick to them and filleted and glued Four inch biaxial tape to the side to bottom joints in one continuous swoop front to back. We let that cure overnight, then screwed on some 2" x1" cross ties to keep it from "flapping", then we carefully pulled our cockpit out, turned it over, sanded and planed the inside edge to a nice round profile, then glassed that with biaxial tape as well. 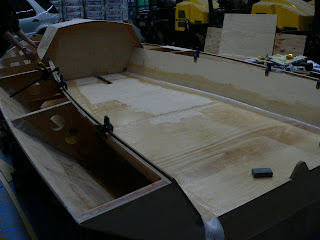 On Thursday afternoon we mixed copious quantities of glue and stuck the cockpit in permanently. Today (Monday) it appears rock solid. We spent the best part of Two hours checking and planing the shearline which had a few "deviations" in it, mostly due I think to the stiffness of the ply, to get what I hope is a pleasing and regular shear. We then did the same to the cockpit to deck joints and I think they are pretty pleasingly curved as well. We cut out and glued up the side decks hopefully for fitting tomorrow.

I say "hopefully" because my fellow team member has forcefully demanded that every inch of the inside of the boat be sanded and checked by feel for those little sharp epoxy spikes that rip hands and spinnakers apart when you least expect it before the deck goes on. You can hopefully see some pleasing lines appearing in the photos below... 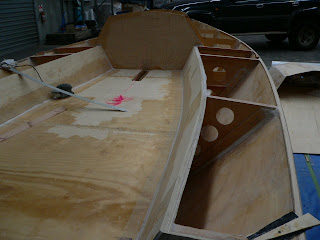 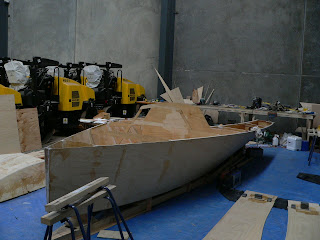 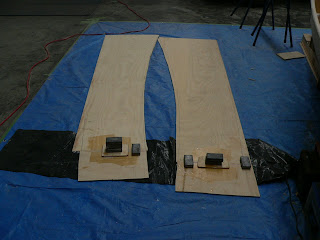