The last few days have been about screwing and bolting things on. Things like chain plates and forestay fitting, kite blocks, traveller ...and of course the stereo system. There is no truth in the rumour that we installed a giant sub woofer under the cockpit, we just thought that the access holes we made to get at the kite block locations would take a little speaker nicely..

Doug Prosser very kindly lifted her onto one of his many trucks with a forklift, then drove her down to RYCV.

Robert Hick is bringing down the keel today, hopefully we don't have too many problems fitting it. After much consideration we decided to lock the keel down with a single half inch bolt through the keelbox and keel and Frank Brockman made us a nice set of stainless steel bushes for the keel box sides and keel holes. We will epoxy them in. There will then be no chance of wood getting chewed away by the bolt if there is any relative movement.

We did it this way because the load paths and hardware of doing this through the keel top plate were just too complicated for me to get my brain around. The boat is lifted via Two Wichard pad eyes on the main bulkhead just eitehr side of the keelbox. We added some reinforcement to the inside of the bulkhead during the build for this. Lines also go to the kite block fittings. 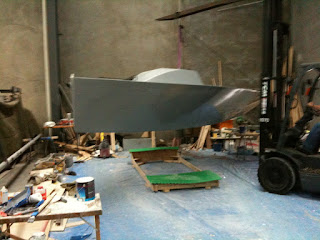 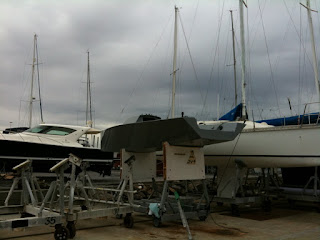 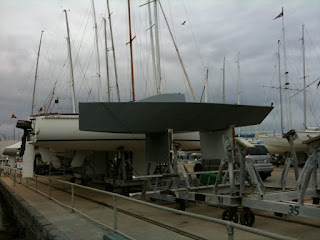