Well the filling had to stop sometime. We just got tired. So today we sprayed the deck with sandable epoxy primer. The more we put on, the better it looked.

Hopefully tomorrow, before a mid week social lunch, we will be flipping the boat.

....No videos though. I think my colleagues would agree that we don't photograph too well at our age.

Doesn't that swept back Luca Brenta lip on the cabin top look cute, as well as practical? 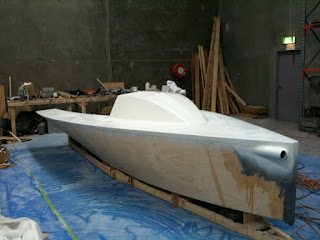 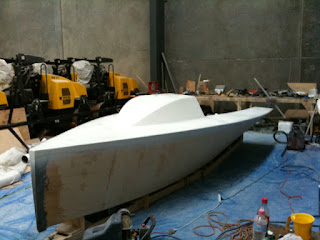 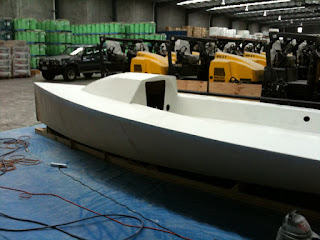 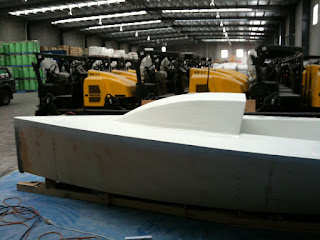 Friday morning....surprise! The mast arrives. Who could resist leaving the sanding and filling and playing with toys?

C-Tech have done a great job. Everything is well designed and put together, great workmanship and....light! We asked for Two sets of spreaders, the top set just supporting the masthead when we are running with the Assymetric because Port Phillip gets quite choppy at times.

The mast comes in Two parts, joined at the hounds, which conveniently reinforces that are. I also noted that the last few inches fof the mast base are reinforced, dealing away with the engineering "Free Edge Problem" that has been the demise of more than one carbon mast. To put it another way, carbon fibre is not "Black Aluminium" and must be worked and cared for differently.

We joined the Two sections and riveted in the tee ball plates then lined up and glued the spreaders for the result below. 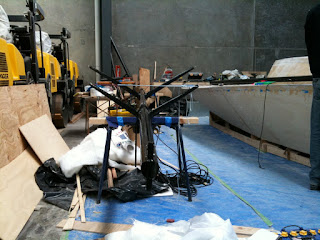 A word to the wise... Those beautiful spreaders are a close fit with the mast, and they need to be placed on the sections before you glue them together or you will be in a world of pain because you can't fit them later. Luckily we remembered.

We were also not thinking clearly when we ordered a carbon tang under the jib sheave box for our Two part jib halliard - the lower spreaders wouldn't fit over the tang and of course the goosneck prevented fitting from below... Doh!

Our solution after deep thought and discussion with Alex was to carefully cut off the carbon tang and smooth the area down a little so that the spreaders fitted over it. We then drilled and tapped a hole to take a small stainless steel saddle to hold the halliard (Below). 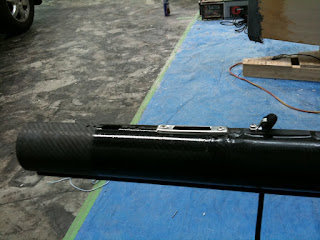 Posted by Sunfish at 3:26 PM No comments:

First the persistence. We glassed the deck, then put Four inch biaxial tape over the shear line which will hopefully keep everything together if we get a "love tap" from another boat.


Anyway, there is sort of an outline of a boat shaped object under there somewhere. 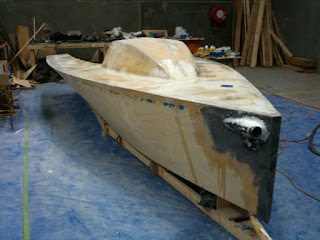 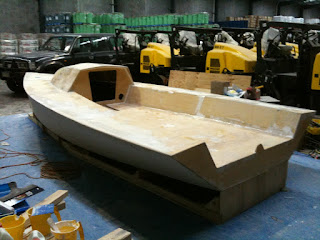 I think the Luca Brenta style lip on the cabin top looks good, should maybe help keep water out, and be a good base for some cleats. 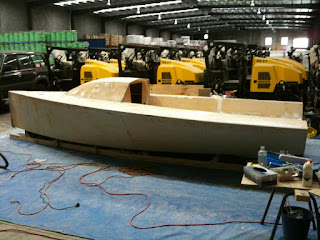 Now the frustration.. Delicate readers may want to shut their ears here.... C-Tech very kindly shipped our mast last Friday, right on time and when they said they would. It is now Thursday and we are still waiting for those idiots at DHL to deliver. They managed to split the Two packages and send them to different locations.

Then they tried to hide their incompetence by spouting gibberish down the phone line. Just for the record, there has not been a thing called an "import licence" for general goods into Australia since about 1968, and in any case we have a free trade agreement with New Zealand. "Delayed by Customs" sounds good until we tell them that we have already paid GST and in any case checked with Customs ourselves. "Delayed by Quarantine Inspection' was a nice try until I tell them that there is no bug on this planet that eats or makes a burrow in Carbon Fibre.

We are still waiting. On reflection it would have been cheaper if I had hopped a plane to Auckland and picked the pieces up direct from C-Tech, then flown back. It's only a Four hour trip costing less than what DHL charged C-Tech for freight, and I might well have not to have paid GST of $500 as well. Plus I could have bought a bottle of duty free Whisky for Alex at C-Tech and another one for me on the way back!
Posted by Sunfish at 10:13 PM 2 comments:

Now You See It, Now You Don't

That's 58 inches of C-Tech carbon prod. We put a little carbon fibre reinforcement around the receiving tube area and stem. We are setting the prod up with a single combined tackline/extender system using 6mm spectra. 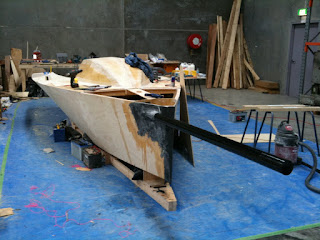 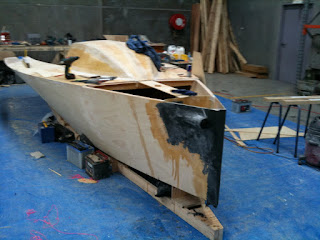 We are hoping to put th e foredeck on today and perhaps finish off the fairing before glassing the deck. We hope to receive the mast some time next week. Time to get some chainplates made up....
Posted by Sunfish at 2:10 PM 1 comment: 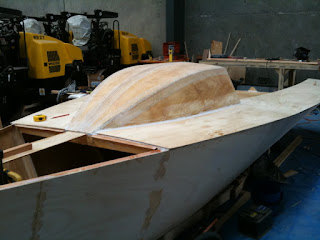 Just a photo of the baot with the side decks glued down and the cabin top cleaned up. We got word today that the prod is on its way from C-Tech in New Zealand and will hopefully arrive Monday so that we can fit the receiving tube and glue up the foredeck.

We looked at the prod Geometry. The photo below shows what 58" looks like. By all accounts our spinnaker is "pretty big" according to Col Anderson at Doyle sails.(Gulp) 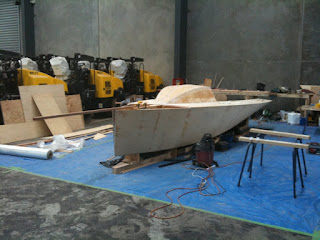 When The Epoxy Starts Smoking...

Well we made this discovery a while ago. If you mix too much epoxy in a container it heats up. Then it gets hot, very hot. When it starts smoking it's time to carefully take the pot outside and get rid of that epoxy real quick.

Well we got the cockpit side decks glued on. If only I'd thought about the fit a little more and the placement of the weights when we held it all down I wouldn't be contemplating filling the hollows they made. Getting the shear line to look right is going to take considerable time after that little mistake. 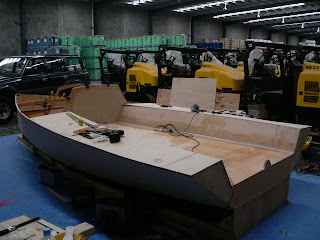 The cabin top is glued on. We have left a "Lip" at the back to be a bit Luca Brenta-ish, and perhaps keep water out of down below a little. We will trim it back neatly when we have the time. 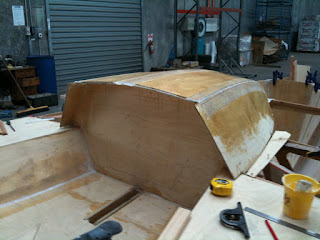 We made up the side decks and chain plate gussets. The gussets are placed slightly differetly according to C-Tech's instructions to match the 30 degree spreader angle of the mast. They are one inch thick laminations as per plan. We lined them up using C-Techs drawing and a string line from the notional centre of the mast. They will be glassed in with lots of biaxial tape. 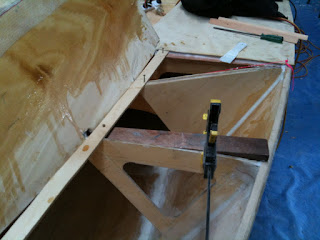 We glued on our side decks and now have a definitely boat shaped object. We were (I hope!) A little more careful about that shear line. 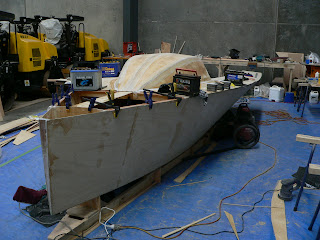 By the way, this is the pattern for the bulb that Professional designer and boat builder Robert Hicks made for us. We weren't game to make the foils ourselves so we asked Rob to do the designing and building in that area. All are wood with carbon laminates. 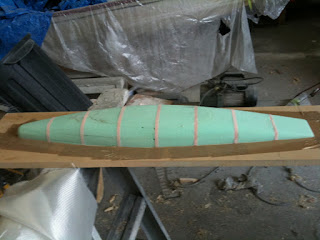 Posted by Sunfish at 1:58 PM No comments: